At Netanyahu’s Nadir, a crisis is an opportunity

Backed into a corner, Netanyahu has ridden the media wave of the kidnappings like leaders before him

The abduction of three Israeli youths in the West Bank, a painful, saddening incident, could not have come at a better time, as far as Israeli Prime Minister Benjamin Netanyahu is concerned. It may come as an unpleasant realization, but a security crisis that serves the interests of a leader is anything but a new phenomenon.

Netanyahu obviously never wished for this to happen, and would surely prefer to see the teenagers safe at home, but truth be told, he was in dire political straits. The amount of time he devoted to the ultimately failed efforts to thwart the election of Reuven Rivlin as president did not escape the public eye. Even the faithful of his Likud party were taken aback by the sheer force of ill feeling that Netanyahu harbored for his party colleague Rivlin. The media were awash in reports of his attempts to abolish the institution of the presidency altogether, as well as his overtures to other potential candidates, including Holocaust chronicler Elie Weisel.

It was complete and utter escapism. Suddenly the Iranian nuclear threat was being dwarfed by the threat from the Beitar movement (which backed Rivlin). For weeks reports about intelligence findings – including warnings of planned kidnappings, of which there were about 40 recently – were making way for reports about the political maneuverings of Minister Gideon Sa’ar and Knesset member Haim Katz.

This was true before the kidnappings and the search operation known as “My Brother’s Keeper”. On the day Rivlin was elected president, Netanyahu had to endure the profound embarrassment of trying to look cheerful as he posed for numerous photos with the victor. Then in one fell swoop, his political downturn was as good as over.

Two photographs from the first days of the operation show the PM in action. In one of them he is seen leaning over to peer at some maps together with Defense Minister Moshe Ya’alon. In the second he is seen giving a speech next to Ya’alon and IDF Chief of Staff Benny Gantz, dressed casual and looking sharp. 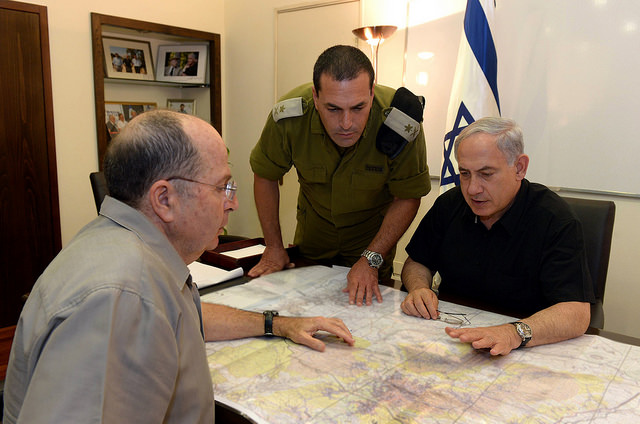 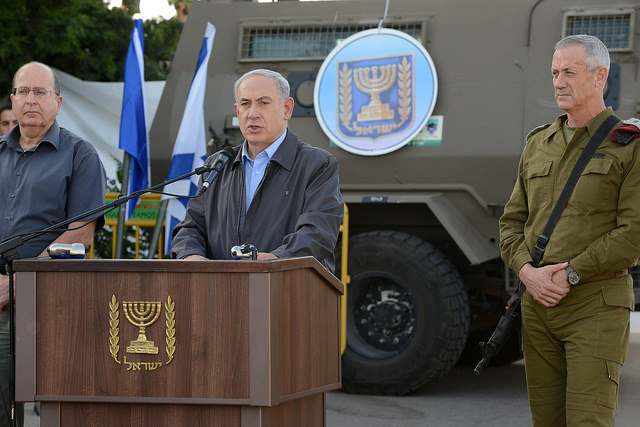 Even as the Israeli media were busy documenting the PM’s movements, but prevented by his spokesmen from asking him tough questions , his well-oiled PR machine was busy blotting out the embarrassment surrounding Rivlin’s election and reinstating Netanyahu to the position of power to which he is so accustomed.

Netanyahu did not invent this method. He is merely a master practitioner who has refined it. Who can forget former US President George W. Bush, who milked the 9/11 disaster for the duration of his first term. His popularity soared and it took the frightened American public years to recover from the threat of terrorism and understand that their president had dragged them into a war in the wrong country. Even when the media pressed him on American casualties in Iraq, the lack of evidence to support the claim that Iraq had weapons of mass destruction, and the enormous toll the war took on Iraqi civilians, Bush did not panic. Instead, he brandished a huge banner reading “Mission Accomplished” for a publicity image, with GIs in his frame. Subsequently, public support for him dwindled and the criticism became louder, yet Bush kept taking pictures with soldiers.

He told journalists (myself included) that only history will judge him, but while historians were hard at work, Bush delivered militant posturing.

Former British Prime Minister Tony Blair also rode this particular wave. As the British public grew dissatisfied with Blair’s partnership with the Americans in the global “War on Terror,” he was posing for photos with British military officials. Just like Bush, Blair successfully adopted the image of a leader who came to restore order in the world.

Less than two weeks since the abduction, the Israeli public is yet to awaken to the hard questions Netanyahu needs to answer. As the political right points to the causal link between the abduction and the release of over 1,000 Palestinian inmates in prisoner exchange deals with the Palestinians, and the left talks about the lack of progress in the peace process as one of the reasons for Palestinian terror, Israelis regard Netanyahu, the signatory of the prisoner release deal and the main architect of the peace talks failure, as the chief authority and guide. And no one seems to hold him responsible.

Tal Schneider, a former media law attorney, is owner of The Plog, a leading Israeli political blog. She was the Washington DC correspondent for the daily Maariv.