In an exclusive interview, Tal Schneider asks Israeli political leader Ofer Shelah MK about the PM’s Temple Mount strategy, hurdles to peace, and the significance of the NSW ALP vote to recognise a Palestinian state.

Ofer Shelah is the deputy leader of the Yesh-Atid party and has been a member of the Knesset for the past four years. Shelah, 57, is part of a growing opposition to the way defence and security issues are being handled by Prime Minister Benjamin Netanyahu.

We spoke during a heated week in Israeli politics, with Palestinian unrest boiling around entry arrangements to Temple Mount prayers following the brutal murder of two Israeli policemen on Temple Mount and slaughter of three members of a family during a Sabbath dinner.

How do you see Israel’s connection with the Jewish community around the world?

“In fact, since the time of Ben-Gurion, Israel has not developed a written formulation of our security concepts. Many people who have dealt with it over the years have noted this and agree with me that the connection of the state to its Diaspora is also part of our self-definition as a state but more than that, it is a security component for us.”

How is this expressed?

“That in every internal or external act, such as the government’s recent decisions about conversion and/or access to the Western Wall, one must take into account the implications for Diaspora Jewry. Our considerations influence them. It serves their sense of Judaism and their personal security and prosperity as Jewish communities.

“Israel is sovereign to determine rules, but unfortunately the considerations of the current government, including with respect to Diaspora Jews, are led by Naftali Bennett, the Likud extremists and by the two leaders of the Orthodox parties, Arie Deri and Yaakov Lizman.

In Australia, there is now a political proposal to recognise a Palestinian state. How does this affect Israel?

“Israel is currently struggling with multiple occurrences around the world, whether it is recognition of a Palestinian state or demands for a cultural boycott and the phenomenon of BDS. This is all happening because Israel is not leading towards a resolution with the Palestinians. As long as we are not initiating one, and we are in the business of wait and see what others are doing, then those global steps will proliferate.”

Moving on to Israeli politics, how do you assess Israel’s security cabinet handling the events surrounding the Temple Mount in recent weeks?

“Unfortunately, we see the same conduct during these recent events as we saw from this Prime Minister and his cabinet during 2014 Operation Protective Edge.”

Can you specify what was wrong with the cabinet’s decision, as it was aimed to check worshippers through metal detectors to sustain security for all following a deadly attack?

“It may be not such a big deal if you look at it through the narrow perspective of the metal detectors, but on the Temple Mount every change or nuance can cause havoc. Both IDF and Shin Bet warned in advance that installing the metal detectors would be highly controversial. IDF Chief of Staff Gadi Eizenkot has also said that the difference between the reactions of the Palestinians in the past (such as in 2015 wave of terrorism) to the current atmosphere is a religious one.

“Once we enter a situation with religiously motivated tensions, a solution to the crisis becomes much more complicated. The security cabinet did not conduct a thorough discussion regarding the initial setup of the detectors, but only a retrospective discussion of their removal. So Israeli ministers aren’t discussing issues in depth, and in addition they make key decisions based on political considerations. Thereafter, they withdraw from their decisions.

“At the conclusions of events, the joyous Palestinians surrounded the Temple Mount. It was broadcast in the media as they watched the Israeli police remove all metal detectors. Then thousands participate in Umm al-Fahm funerals of three murderers.”

Do you have any criticism of those multi-participants Shahid funerals?

“The mass funerals Umm al-Fahm are regrettable and troubling, and are a result of poor and inappropriate Arab leadership. But it is important to note that this does not characterise the entire Arab population in the State of Israel. I know that for a fact:  the Arab public disapproves of the murder of policemen and most of the Arab society wants coexistence between Arabs and Jews in Israel.”

“As for the joyous celebrations surrounding the removal of the metal detectors at the end of two very tense weeks, again, it is the result of the conduct of the Prime Minister and his security cabinet ministers. They did not properly weigh the consequences for our allies like Jordan, so the Palestinians, who are always struggling for their distinct status on Temple Mount, have gained a double win, both on us and on Jordan.”

Your answer regarding Umm-El-Fahm is somewhat evasive. You mentioned earlier heated religious effects from the Temple mount. Should not we face reality, as Israel’s Arab population grows hostile?

“No. I do not think that we are burying our heads in the sand. I do not judge an entire population based on the murder of three people. Everyone who examined the incident notes that they acted on their own initiative.

“The religious element should concern us, but we must make sure that it will not be a central motive, because then we will enter into situation that will be much harder to solve. I frequently visit Arab communities and talk to people. I can guarantee that this event does not represent the vast majority of Arab society.”

Defence Minister Avigdor Liberman responded by calling for the deportation of Sheikh Raad Salah, the leader of Israel’s Northern Islamic Movement, who was just released from jail following a verdict of incitement. How do you respond to these statements?

“I think he expressed frustration, as may be felt by every citizen. However, the right solutions are not applicable on a personal basis. Overall, Arab citizens’ attendance at demonstrations against the government was low. Without referring to Raed Salah personally, we must appeal to the majority of the Arab and Jewish public, who want to live together.”

Regarding Israel’s tense border with Syria, I read that you heavily criticised Prime Minister Netanyahu for failing to achieve anything between our purported good relations with Trump or Putin. How worried should we be about the growing presence of Hezbollah and Iran close to our border?

“We have an opportunity due to common interests with big state-players around us. The ties with some of the countries around are not based on mutual fondness, rather on their quest for stability vis-a-vis Iran and radical Islam. But, they all keep signalling us that nothing will move forward without progress on the Palestinian front.”

“But our leaders, who tell the Israeli public that there can be change in the Middle East without the Palestinian issue, are misleading. There will not be any shift regarding Israel’s relations with its neighbours just because of the good relationship with Trump or because he promised something during his campaign. I doubt that the United States has a clear policy in Syria. And in any case, even if it has a policy, it is not clear for how long the Americans can be counted on.

“Therefore, when we talk about regional issues, including Syria, we must understand that we need a restart of the process with the Palestinians. On the one hand, this will lead to a critical outcome for us, a Jewish and democratic state. But at the same time, we need an active partnership between Israel and many other elements in the Middle East, so that we will not get to the situation in Syria where our interests are not clearly laid out on the table. 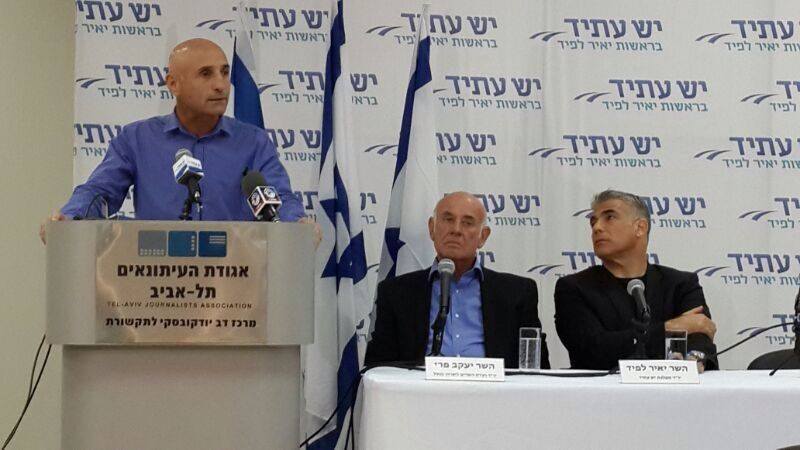 The head of your party, Yair Lapid, is not very vocal against the Prime Minister. Do you agree with his soft-spoken approach?

“Lapid says things that are similar to what I have told you.”

But do you agree with his delicate style?

“I’m not a critic of speech styles. Lapid consults with me often and we shape the policy together, and he does not say things that are different from what I say.”

Are you happy with the election of Avi Gabbai as head of the Labor Party?

His election to head of Labor Party was surprising.

“I did not think that Labor would remain without a party chairman. I am very friendly with him. A few years ago, when he was still the CEO of Bezeq (Israel’s biggest Telecom Corporation) and wanted to start running marathons, before his first run, he came to me for tips. I helped him prepare a training program. And I also remind him occasionally that in the marathon we both ran, he produced a very nice result, but I ran faster.”

The two of you ran the same contest?

“Yes. We ran in the same marathon. And he had a good result but mine were better .. [Laughs] The political arena is not a vacant place and we, in Yesh-Atid Party are preparing for a political confrontation with the most powerful and talented opponents”.

“There are substantial differences. Yesh-Atid has become a real governmental alternative. We do not ask ourselves who we are and why we are different. There are people in the Likud and /or in Orthodox parties that resemble us or others but that’s beside the point because we’re not looking right or left, but at ourselves.”

Will you be a minister in Israel’s next government?

“I suppose so. If we are in power, I will definitely be a minister.