Talking to PMO’s officials earlier today (Friday Aug 22) they confirmed to me: “Following readers appeal we decided to take off the image and upload the same message, rearranged with different images. Hamas is ISIS, both murderous terror organizations who wish for establishment of Islamic nation while demolishing women right, LGBTs, and minorities. We will continue to argue the same.”

In the height of indirect negotiations between Israel and Hamas, it is worth noting that the message itself is poor. If Israel’s public diplomacy claims that Hamas and ISIS are the same, so why negotiate with them?

Here is Netanyahu’s original tweet (Thursday, Aug 21), with a comparative concept claiming to portray Israel’s as fighting with the worst of all, ignoring the fact that Israel is still conducting indirect negotiations with Hamas.

Twitter users (myself included) received the following update from Twitter warning with respect to the sensitive material:

That was obviously done (by Twitter) with respect to images taken as screen shots from the original gruesome video, minutes before the barbarian beheading of James Foley. US administration and the world media realized that they shouldn’t provide a space for that kind of monstrosity. It makes sense to to block and stop spreading those images, as well as probably educate the wide public with respect to the limiting of what people share. The potential damage and distribution of this videotaped murder of an american journalist, is immerse. Sad to realize that , but due to the fact that he was a US citizen and a working journalist (Global Post), the images and videos have greater spreading potential. Wish I could say the same with respect to cruelties of local citizens in the same area, but it is not like that.

Foreign media disapproved of the manner in which Israeli PM is spreading the horrific images:

Add PM of Israel to the list of those using pics of James Foley being beheaded for low-end politicking: https://t.co/yQdc7QgOPk

A day earlier (Wednesday Aug 2o) Minister of Commerce Naftali Bennett went even further than the PM and put up a screen shot taken off the paused video scene, while calling his followers (~350K): “SHARE. So the world will finally understand“. Bennett, who may be fantasying on becoming Minister of Public Diplomacy had 700 shares within less than 30 minutes later. I did not bother to check thereafter.

However later than than that, realizing that the original image might be problematic, Bennett took it off and replaced it with a CNN screen shot.

Apparently elected officials in Israel equate themselves to media outlets and do not seem to understand that posts and info that might be necessary in order to report the news should not work for political figure riding on waves of popularity while spreading horrific images to gain more political power. 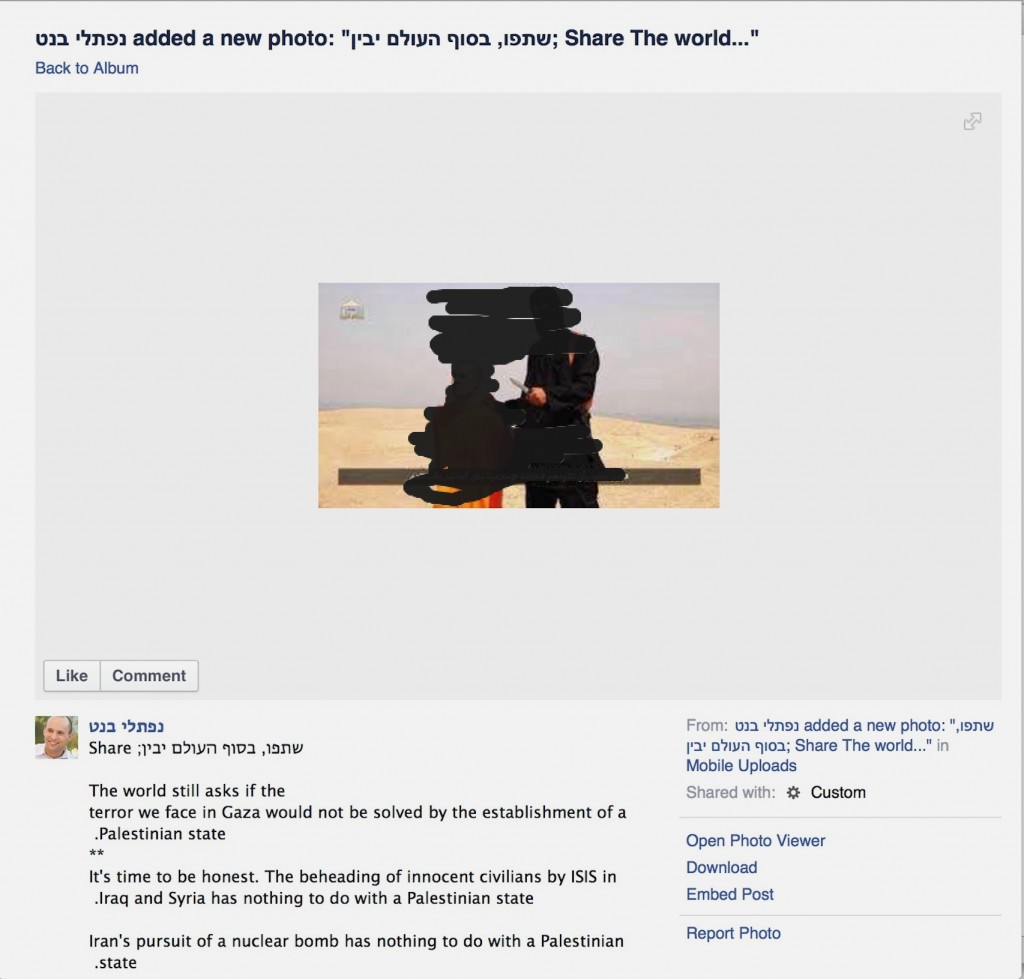 Finally, today (Friday Aug 22) Netanyahu’s media team decided to take Foley’s image off the feed. Somebody there realized this was a huge mistake and was wise enough to change course. Instead they put up the following public diplomacy tweet:

The simple truth: Hamas is ISIS. ISIS is Hamas. pic.twitter.com/oOtVuf5lPJ

This post appeared earlier today (Friday) here on The Plog in Hebrew, with the quotes from the PMO given exclusively to me (hence if you quotes the Plog, do not  forget to credit).